Ætna: Before The Beginning

Note: Locations referenced in the following text can be found in the map above

The Phoenicians may have been fine merchants and salesmen, but it took the arrival of the Greeks to imprint the concept of true viticulture in Sicily. In 734 BCE, a small fertile valley was settled at the northeast opening of the Alcantara Valley at Capo Sciso, forming Naxos.
Within ten years of their arrival, the city of Catania was founded. By most accounts, the Greeks worked hard to make their new home as comfortable as possible. The Greeks quickly adopted the Phoenician writing system and worked side-by-side with the local Sicels to organize farming practices, build temples, outdoor marketplaces, and agora where the population could gather … with wine, of course!
Whether the grapevines that the Greeks found on the island were already being grown in an organized way or not is uncertain. What we are clear about is that the Sicels and the Greeks considered Etna a sacred place. The food and wine that grew along her flanks were special. Though the Sicels rarely had to work hard to reap a healthy harvest, the Greek settlers sought to exploit the fertile landscape by implementing more rigid farming practices. 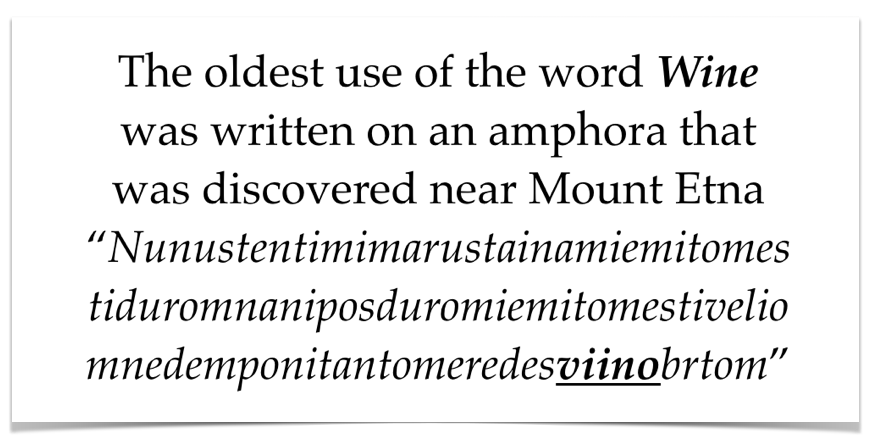 According to legend, the seaside south of Naxos, on Etna’s eastern coastline was one of Ancient Greece’s “beautiful cities,” called Kallipolis, the name Socrates gives Utopia in The Republic. This area, just south of Naxos, was considered one of the most fertile landscapes in the Classic World.
Small city-states (poleis) formed along Etna’s base. One polis was Xiphonia, the colony that gave birth to Akis. Other poleis expanded north into the Italian peninsula along the fertile coastlines. As more Greeks arrived, the eastern half of Sicily and select areas in the lower Italian Peninsula were populated, creating what would become known as Magna Graecia (Greater Greece). Settlers arrived from northern Italy, Greece, and the rest of the known world. Populations and ideas mingled and new generations of farmers were instilled with a greater devotion to viticulture. The numerous valleys and hills presented countless opportunities for successful planting of vines from Greece and Italy. Soon enough, Magna Graecia had a new moniker, Oenotria, the “land of staked vines.”
A world filled with wine! Mount Etna’s new wine culture symbolized more than the ethereal. One could now find economic promise through the industry of wine. Good viticulture and winemaking required laborers. Proper storage of the wine necessitated artisans to form the best ceramics. Merchants needed horses and boats and skilled seamen to transport their product. But wine also provided succor. It was a great comfort to the world. By drinking wine one could find protection from cold nights, illness, depression, or fear. Wine gave people courage. It offered inspiration and promise.
The environs of Etna were perfectly positioned to produce myriad goods for Siracusa, Catania, Taormina, and Athens. By the 5th century BCE, the culinary influence of eastern Sicily named Siracusa, 60 miles to Mount Etna’s south, as the epicenter of the ancient gastronomic world. In fact, the oldest written use of “wine”— “Nunustentimimarustainamiemitomestiduromnanipos-duromiemitomestiveliomnedemponitantomeredesviinobrtom”—comes from this time period and was inscribed on an amphora found in Centorbi, approximately 10 miles from Adrano, on Etna’s southern flank.
This was, of course, before the beginning of Roman influence. After 200 BCE, everything changed. The pastoral Etna countryside became the stage for industrialized farming and viino evolved into a product of economic value as opposed to a gift from the gods.

Notes and Sources —
S. Benjamin — “Sicily: Three Thousand Years of Human History.” Steerforth Press. New Hampshire. First. 2006.
* Several ancient Greek cities were given the name Kallipolis. There is no physical evidence other than remnants of a Roman farm and Green coins found in the area where Giarre now stands and Mascali once stood. In 403 BCE, the ancient city of Naxos and the cities south of Naxos were destroyed by the tyrant Dionyisus I during a rampage which included enslaving the entire population of Katane (Catania). One thousand years later, the area now known as Mascali (Maschalas) had a strong connection to the Christian Church and a vibrant vitivinicultural heritage that would contribute to the modern linguistics of Etna wine culture.
H. Johnson — “The Story of Wine: Greece, The Wine-Dark Sea.” Mitchell Beazley. London. 1999.
R. R. Holloway. — “The Archeology of Ancient Sicily.” Routledge. 2000. 86.
“Mystic Cults in Magna Graecia.” — Ed. G. Casadio, P. A. Johnston. Univ. Tex. Press. Austin. 2009.
E. Hamilton. — “Mythology: Timeless Tales of Gods and Heroes.” New American Library. Little Brown & Company. Mass. 1962.
F. De Angelis. — “Archaic and Classical Greek Sicily: A Social and Economic History.” Ox. Univ. Press. 2016. 91, 104, 125.
A. Dalby. — “Food in the ancient world from A to Z.” Abingdon, Oxon, England. Routledge. 2003.
N. Belfrage. — “Brunello to Zibibbo: The wines of Tuscany, Central and Southern Italy.” Mitchell Beazley. Faber and Faber. London. 2006.
F. De Angelis. — “Archaic and Classical Greek Sicily: A Social and Economic History.” 2016. 234.
I. D’Agata — “Native Wine Grapes of Italy.” Univ. California Press, Berkeley. 2014. 104.